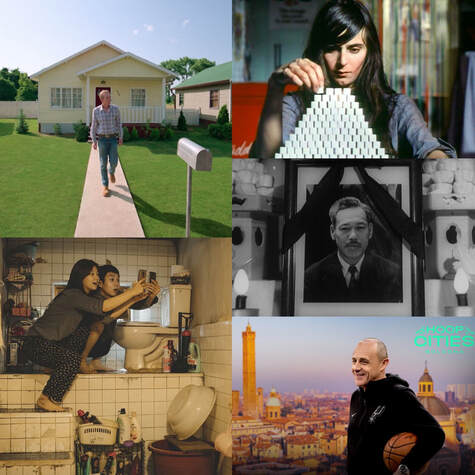 October consisted of the NBA coming back and the MLB playoffs getting really juicy. I’m not really sure how I got around to 29 films, but I did and I had a lot of fun. I will say that I’m having a hard time managing my film life because there’s plenty of new shit that has come out that is up my alley but then I get so addicted to watching stuff from the past that I haven’t seen. It’s quite the conundrum that I will continue to have and I’m okay with it!

5. Hoop Cities Bologna
My brother and I have subscribed to NBA League Pass for a long ass time. We did it again in the middle of October because the regular season started on the 18th. Whenever we sign up, I always scroll through the app to see what all they have added as extra entertainment. This year, they dropped a really cool collection of documentaries called Hoop Cities. I watched the Paris, Belgrade, and Bologna editions and totally fell in love. I will watch the rest soon enough but my favorite so far is Bologna because of the connection it has to my favorite team here in the States, the San Antonio Spurs. Basketball is a game for the world now and I love being reminded of that every now and again.

4. Ikiru
We did Viva Zapata! on our Oscar Sunday show at the beginning of the month so I wanted to watch a couple other films from 1952 for more perspective on the year. I searched 1952 on the Criterion Channel and one of Akira Kurosawa’s masterpieces, Ikiru, popped up. Before I could click on it, I noticed a little interview with Bill Hader talking about the film. After three minutes of Hader praising the hell out of it, I dove in and came out the other side as an even bigger fan of Kurosawa. The dude just knew how to touch the soul through filmmaking and dare I say that Ikiru is the one that has moved me the most so far. Fantastic stuff!

3. Next of Kin
October is a big month for horror lovers. I just love the genre no matter what month it is, but I know that shit can be heightened when a holiday like Halloween is creeping in. The Criterion Channel added multiple collections in October that are dedicated to horror, so I decided to tackle a few films from the 80s Horror collection. I watched The Slumber Party Massacre, Henry: Portrait of a Serial Killer, Brain Damage, and Next of Kin. I liked those first three but good god I really loved Next of Kin. Some fantastic Australian slow burning brilliance directed by Tony Williams. There’s something really fucking cool about a low-budget horror film that manages to be extremely frightening by just toying with our minds. I will not be forgetting the ending of Next of Kin anytime soon and if I get a chance, I will add the film to my personal collection.

2. Parasite
The 92nd Academy Awards provided quite possibly my favorite Oscar moment ever. Parasite winning multiple awards including Best Picture was legitimately special and it’s a night I’ll never forget. Connor and I were watching that ceremony live on TV together and we recorded the Best Picture Showdown for our Oscar Sunday show based on the nominees from that year together. It was a lot of fun to rewatch the 2019 films and especially Parasite which is on Hulu. What a fucking movie! I know it’s weird to give awards out to art but Bong Joon Ho and company deserve every bit of recognition that they have gotten thus far.

1. Barbarian
I went to the theater twice in October. I saw The Woman King with my dad, which was a cool film that I could see getting some nominations. The other one was Barbarian which I saw at the Alamo Drafthouse with my wife and it blew our minds. I loved all the weird and dark decisions that were made and I also loved how committed it stayed to those decisions. Honestly, I think Barbarian is my favorite 2022 film along with Nope. There’s just so much shit to chew on, whether it be the plot, or the wild images that are littered throughout. The fucking Justin Long entrance will be one of the iconic moments I think about when I think about this current era of horror.