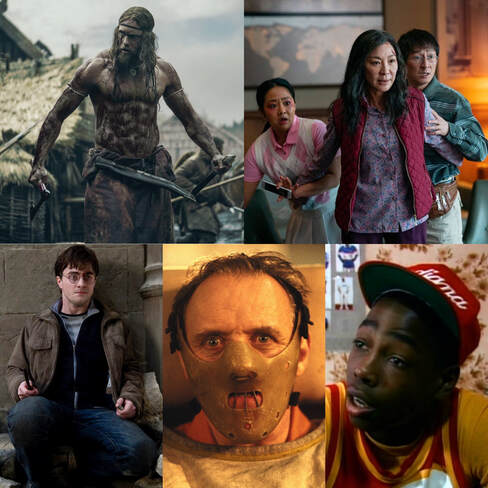 I had to put some movie shit on hold during April, because the NBA regular season came to a close and the playoffs started in the middle of the month. I’ve been enjoying the action quite a bit and that won’t end until June, but April is when the first round happens so it means more games. In May and June, it’s usually quality over quantity as the amount of teams left starts to dwindle. Anyways, I was still able to watch 22 films in April but I had to put my animated DC watch on hold to get to everything I needed for the Oscar Sunday podcast. I will get back on the DC horse in May.

In my other monthly entries, I have been putting DVD for films that I own but I’m going to start putting PC for films in my personal collection because some of them are on Blu-ray and some of them are special editions like Criterion or Arrow.

22 total films watched for an average rating of 8.32

Top 5 April Watches
5. Harry Potter and the Deathly Hallows, Part 2
For episode 98 of Oscar Sunday, Connor and I discussed the Harry Potter franchise which gave me a legitimate reason to break out my Blu-ray collection and rewatch all 8 films, even though they are all on HBO Max. We based the episode around the final film, Deathly Hallows, Part 2, but we also created a Harry Potter character Hall of Fame which was an absolute blast. It consists of 16 characters so we had to make really tough cuts and explain why the 16 we chose belong. It’s not my favorite franchise but I don’t think any of the films are weak with those 8 HP installments. That’s rare and worth talking about for a couple hours.

4. The Silence of the Lambs
Episode 100 of Oscar Sunday was planned out for a long time. All of us at Filmgazm love the genre of horror so it felt right to marry that passion with the only Best Picture winning horror film ever. I’ve owned Lambs for a very long time, but I try to only watch it every now and again because it really is a treat to go through those two hours of thrilling scenes that seem to just stack up on top of each other. That episode was very exciting as Connor, Caleb, and I had some fun talking about a straight up classic.

3. Hoop Dreams
Ahhh Hoop Dreams. What a fascinating documentary that might just be the best within the genre that I’ve ever seen. On episode 97 of Oscar Sunday, I brought on my older brother, Adam who knows more about basketball than anyone I know. We went through the entire 3 hour doc and chatted about hoops, sports documentaries, and the 67th Academy Awards because Hoop Dreams was up for Best Film Editing. We released the episode on the last day of the NBA regular season, so we got to combine 2 of my favorite things, which is film and basketball. I own the Criterion edition of Hoop Dreams but it’s available on Criterion Channel and HBO Max.

1. The Northman
Robert Eggers has now put out three films that are tremendous. The Witch is some great wicked shit, The Lighthouse is a pure masterpiece, and The Northman shows just how fucking talented the dude is. I was blown away by how great everything looked and how violent it got in certain moments. I’ve been thinking about The Northman ever since the credits started rolling at the Santikos Embassy theater where I saw it with a big group of some family members and friends. Eggers isn’t even 40 years old yet, so I would probably put him somewhere in the top 10 directors to look out for over the next couple decades.