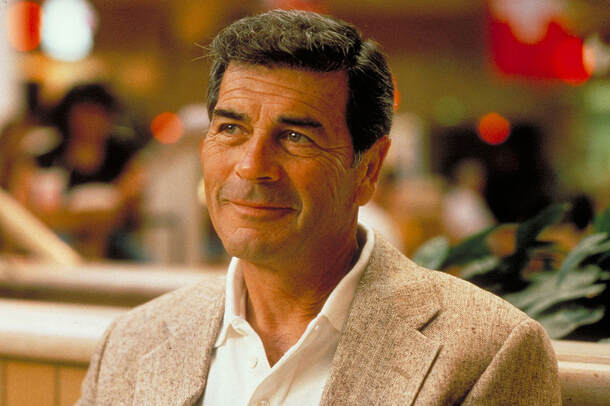 Connor got on his phone when the credits started rolling after we finished watching El Camino to see that Robert Forster had passed away. First off, Rest In Peace to a terrific actor. He was 78 years old with cancer, but surrounded by loved ones as he passed. He will be missed dearly. Forster leaves behind that scene with him and Aaron Paul talking about Hoover vacuums, which was probably the best part of El Camino. On Episode 5 of Filmgazm, our first ever Weird Shit Wednesday, I stated that Max Cherry is my favorite Tarantino character of all time. Cherry, Detective McKnight, Scott Thorson, Sheriff Truman, and Ed are the immediate roles I think about when I hear “Robert Forster.” He has over 150 acting credits and from what I’ve read, he will appear one last time in Steven Spielberg’s television show, Amazing Stories. It’s unclear when exactly that show will air. Forster has nothing but respect from TV and film fans. He’s one of those actors that might appear in some pretty average products, but he will bring his talent no matter what. I am always going to remember him for those roles I mentioned before. He was nominated for an Oscar, which stays on the internet forever. He deserves that! Robert Forster is going to be remembered as a great supporting actor who lifted every scene he was in by just sharing his presence.

The first time I remember consciously appreciating a Forster performance was in 2011 when I saw The Descendants. By 2011, I had seen him in 2002’s Like Mike around 50 times as Coach Wagner of the Los Angeles Knights. How could we lose to the Bulls! I was 16 years old and definitely forming my own opinions about films. During that time, my older brothers were suggesting films to me and I was eating it all up. In fact, I saw The Descendants with my oldest brother in theaters and now I own it on DVD. It was nominated five times at the Oscars and took home the award for Best Adapted Screenplay. I’ll always believe it was the right choice for Best Picture, but I understand why a silent film won. That year’s nominees for Best Picture were…The Artist, The Descendants, Extremely Loud & Incredibly Close, The Help, Hugo, Midnight in Paris, Moneyball, The Tree of Life, and War Horse. That’s a pretty solid group of films, but there’s not any typical Best Picture films. Those are vastly different films with very different intentions. I just think The Descendants will last the longest from a quality standpoint. George Clooney is the star of the film and his character, Matt King has not been a good husband in the eyes of his wife’s father. That’s Forster as Scott Thorson. He comes in for a scene in the middle of the film rocking an unbuttoned Hawaiian shirt, a Hanes undershirt, cargo shorts, sandals, and tube socks. Scott is receiving some of the toughest news a father can handle, and Forster has just a few minutes to portray how devastated Scott is. He shreds Matt’s husband and father skills to pieces and then cold-cocks Sid right in the face. Scott pops up again later on in the film to berate Matt once more. He’s cold as hell one second and then crying next to his daughter the next. Those two scenes showcase the range that Forster contains as a performer extremely well.

As I got into my late teens, Tarantino films became a necessity in my day to day life. I watched Dogs, Fiction, and Basterds in middle school, which are still some of my favorite films of all time, but my most intense QT phase came around 2014, so a year before The Hateful Eight came out. I bought a couple on DVD, borrowed the rest from my older brother, and then started watching them over and over. The one that caught my attention the most was his third film, Jackie Brown. I wasn’t quoting it as much as the others or even talking about it as much as the others because it simply isn’t nearly as popular.  It’s well respected but it doesn’t have that Tarantino umpf that most fans are looking for. Forster auditioned for a role in Dogs in the early 90’s, but didn’t get any part obviously. The story goes that Forster was a huge fan and they ran into each other at a restaurant a few years after that audition. Q told Forster about his adaptation of Rum Punch by Elmore Leonard. Forster read the book and screenplay in a couple sittings and became the shoe in for the role of low key bail bondsman Max Cherry. Jackie Brown came out with an underwhelming box office showing and a bunch of mixed reviews. The only thing everyone could agree on was that Max Cherry is an unforgettable character. The Academy noticed him after three decades of working as he finally found the perfect role for him to leave his mark. He was nominated for Best Supporting Actor and up against Robin Williams in Good Will Hunting, Anthony Hopkins in Amistad, Greg Kinnear in As Good As It Gets, and Burt Reynolds in Boogie Nights. After serving up a monumental performance in December of '97, that award was all Robin’s. What a group of actors though! He was competing with the best of the best, rightly so. Forster credits Tarantino for reviving his career and giving him a sought after opportunity in becoming a part of one of the most famous directors filmographies.

Another Director I started studying in my late teens was David Lynch. Lynch has been nominated 4 times by the Academy, and has recently been selected for an honorary award. I still find so many new things when I rewatch his work. Random things that usually add up to nothing. It’s a wonderful loop to be in. I started with Blue Velvet, then I went further back with Eraserhead and The Elephant Man. All three of those films have something fantastically different to offer, but it’s the 2001 mysterious Mulholland Dr. that totally convinced me that the man is a genius. Mulholland is filled with heat check performances and uncanny surrealism. Every actor fucking brought it to that set, with a 55 year old Lynch captaining the ship to an end product that is a chaotic masterpiece. Forster plays the very serious and slick Detective McKnight who gazes upon an ominous Los Angeles at the beginning of the film in fine fashion. Of course, Lynch also offered his talents to television with the ABC series Twin Peaks. There were two seasons in the early 90’s and then a return in 2017 to pick back up 25 years after the happenings in the 90’s. And who shows up for 10 episodes as Sheriff Frank Truman, brother of Sheriff Harry Truman from the 90’s? Robert fucking Forster. As if this show needed more interesting people in it. Again, he simply adds to the wonder of that show without taking anything away.

There’s no surprise that Vince Gilligan cast Robert Forster for a character eerily similar to Max Cherry as he has been very open about his admiration for Tarantino. Forster brought the best out of Aaron Paul in El Camino. Ed got the old Jesse that’s always just shy of getting what he needs. Ed is mentioned in Breaking Bad a couple times before actually appearing in one of Season 5’s excellent episodes, "Granite State". Ed successfully gets Walter and Saul out of Albuquerque for a hefty price. Forster and Cranston get to have a couple moments together playing cards and shooting the shit, which is a treat to watch. Ed is the only character on that show that made Walter seem inferior. Walter dealt with the worst kind of drug lords throughout his run, but Ed is not a man you can fool. He demands full cooperation and that proved to be very hard to get out of Walt, but he does. It’s remarkable, because Walt absolutely needed Ed. Saul needed Ed. And in El Camino, Jesse needed Ed. Shit, I feel like I need Ed at this point. Robert Forster is one of my supporting actors of all time. I’ve seen a couple of his lead roles from back in the 80’s and he could really carry films too, but he serves best as a 6th man kind of performer who consistently shows how important it is to have a great actor filling even the smaller roles. He just so happens to be in two of my top 10 favorite films of all time and two of my top 5 favorite TV shows of all time. Robert Forster will be missed dearly, but his work will remain a massive part of my life as I re watch some of my favorites and discover new material he lent his talent to.